Downpatrick & County Down Railway’s summer season starts on Saturday 17th June this year, and runs every Saturday and Sunday through to September 10th. With a choice of steam or diesel trains depending on which date you visit, there’s something for everyone from the die-hard enthusiast to the family looking for a fun day out.

Most of our running days are steam, but please check before you travel to be sure.  Diesel trains operate on Sundays 18th & 25th June, 2nd & 9th July and 27th August.

Trains depart from 1pm-4pm on every running day this summer. Our opening times have changed this year, so please check out the details here.

Our trains will run from Downpatrick station to Inch Abbey each day to our standard timetable, which you can view here. Our newest attraction this year is Downpatrick East Signal Cabin, which has just been officially opened after a long restoration project; you can also visit the museum, carriage gallery, model railway and buffet as usual, and enjoy a walk to Inch Abbey itself if the weather is nice. (Good luck, you know what summer is like here!)

We are also running a steam service on Bank Holiday Monday, 28th August, and look out for details of our European Heritage Open Days events on Saturday 9th and Sunday 10th September.

The railway is open on Wednesdays as well for access to the carriage gallery and museum. If you are travelling a long distance, please check to make sure before travelling.

If you have any questions, please get in touch with us here. 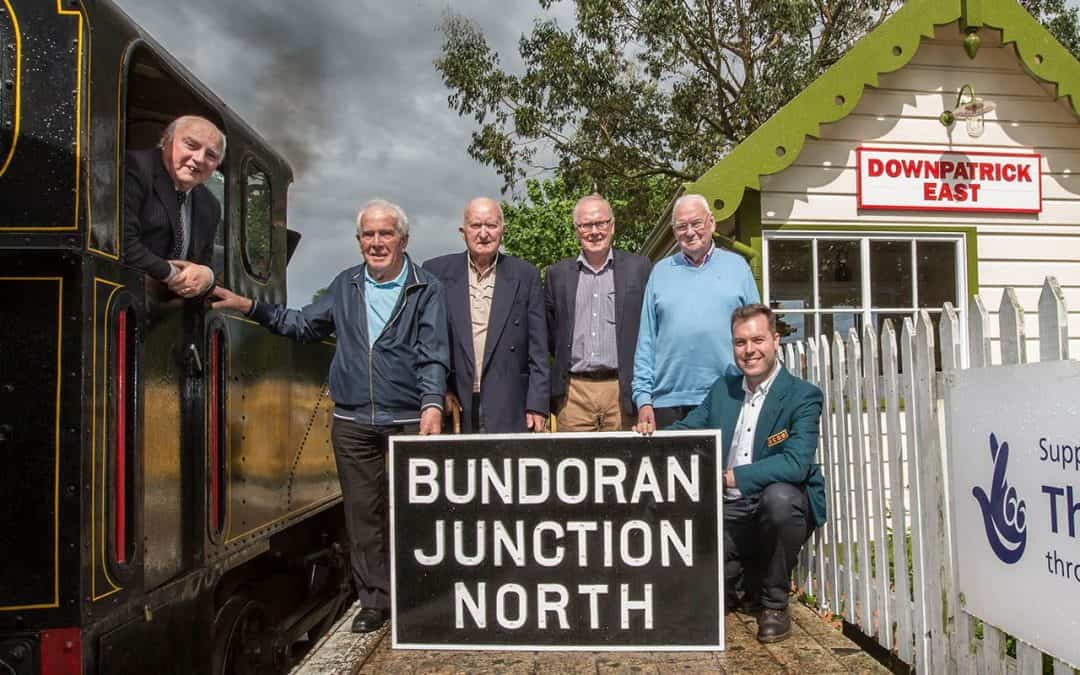 Signal Cabin opens to the public

An historic railway signal cabin that lay in an orchard for nearly 60 years has been restored to its former glory by the Downpatrick and County Down Railway (DCDR) with the help of a £9,000 grant from the Heritage Lottery Fund.

In its working life, the cabin used to control the north end of the triangular Bundoran Junction in Kilskeery, County Tyrone, formerly a major junction for the Great Northern Railway (Ireland) network, where trains including the famous ‘Bundoran Express’ diverged to travel to places like Omagh, Enniskillen, Fintona Junction (where the famous horse tram operated), and the seaside resort Bundoran itself, before the entire line was closed sixty years ago on 30th September 1957.

The cabin was formally opened to the public by veterans of the old GNR(I) Railway on Saturday 3rd June, along with other invited guests. Railway Chief Civil Engineer, David Crone, said, “Very little of the railway infrastructure from the west of the province survives so we are delighted to have restored this significant piece of railway heritage.”

David Crone continued the story of the cabin, “While Bundoran Junction Station survives as a private dwelling, we didn’t think any of the small signal cabins still survived until a chance discussion with one of our members and a Fermanagh local on boat in the middle of Lough Erne!

“He told us that the former Bundoran Junction North cabin had been saved to be used as a garden shed in a Fermanagh home.”

Mr Crone explains the scene that they found, “The top half of the signal cabin had lain for over 50 years in an orchard in Ballinamallard where it had been put to use as a very superior summerhouse but had suffered somewhat in later years due to age and the orchard becoming a bit overgrown.

“The location was known to a few ex-Great Northern Railway veterans in the area who kept the cabin’s survival and details of the exact location a well-guarded secret. When the site came due for re-development the owners were very keen to see the cabin saved, and our friends from the Headhunters Railway Museum in Enniskillen helped us recover it in 2011. The signal cabin before restoration

Whilst initial inspection revealed that although the base was rotten, the vast majority of the structure was sound and would be suitable for restoration and a new use.”

He continues, “This has involved essentially rebuilding the entire base of the cabin, building a new brick base using reclaimed bricks, as well as sourcing an original lever frame from our friends in Irish Rail, that returns the cabin to its original purpose of controlling the track and signals in our station.”

Railway chairman, Robert Gardiner, added, “For us as a heritage railway and accredited museum it’s so much more rewarding to be able to restore a building that has some real provenance behind it, something you would have seen in use if you were a railway traveller in the west of Northern Ireland, rather than creating a mock replica of something.”

Selwyn Johnston, Curator of Headhunters Railway Museum who helped uncover the cabin’s location, also congratulated the restoration, “The volunteers at the Downpatrick & County Down Railway are to be congratulated for their foresight in saving this unique part of our railway heritage and subsequently restoring the signal cabin to its former glory once again. “Former railway employees who worked on the Great Northern Railway are looking forward to attending the official opening of the signal cabin, which is extremely poignant as this year marks the 60th anniversary of the closure of rail services in Fermanagh. They will be joined by those who lived in Bundoran Junction after the railways closure and have fond memories of the signal cabin.”

Tony McCusker, Member of the Heritage Lottery Fund’s NI Committee added “The discovery of this modest but important piece of heritage nestling at the bottom on a garden was a lovely story and we were delighted to be able to help it with the next part of its story. Through our small grant programme we were able to help the DCDR team to transport the signal box to their Downpatrick museum site and to painstakingly restore it to its former glory. The signal box is now looking great and adds to the wealth of attractions at Downpatrick railway museum. It is thanks to National Lottery players that we can help fund heritage projects, large and small.”

To add to the restoration project and working signal exhibition, the project team are keen to obtain any Great Northern memorabilia or photographs so they can include this in an interpretative display in the restored cabin. Mr Crone adds, “We are also interested in contacting anyone who has recollections of life at the Junction as these memories are as much part of the cabin as the wood that makes up its fabric. If anyone has anything
they could share we would be grateful if they contact either ourselves or Headhunters Railway Museum in Enniskillen.”

The grant has been awarded as part of the Heritage Lottery Fund’s new small grants programme ‘Sharing Heritage’. The project aims to create a publicly accessible mechanical signalling demonstration to add to the existing attractions at the Downpatrick heritage railway.

Visitors will be able to explore the signal cabin themselves at the start of the DCDR’s summer train running season, beginning every weekend starting from 17th June.