How the trackbed looked in 1984

Unlike other railway projects in the British Isles, the DCDR did not have the luxury of moving into the site with a railway infrastructure still intact as has been the case with many other preserved railways in the United Kingdom, who moved in as soon as British Rail moved out.

The original line had been closed on the 15th January 1950 by the newly formed Ulster Transport Authority, which was a nationalised institution set up in 1948 to amalgamate the three independent railway companies (namely the London Midland and Scottish Railway (Northern Counties Committee), the Belfast and County Down Railway and later the Great Northern Railway of Ireland) with the bus and freight operator the Northern Ireland Road Transport Board.

The closure of the line was part of the UTA’s rationalisation of the transport system and the line was lifted in 1953, with the trackbed sold off to local farmers, and most of the infrastructure, such as signalling, bridges, etc. removed for scrap. Many stations were retained for use as bus depots, and this was the case with Downpatrick Station. Unfortunately, after Ulsterbus (the bus operating company set up after the break-up of the UTA in 1967) moved out of these premises in the mid-seventies, the station was demolished to make way for a supermarket (which itself has since been razed to the ground ), ten years before the DCDR came into existence. All that remained of the original station complex was a small part of the yard used as a Department of the Environment Roads Service Depot. 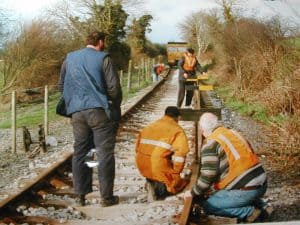 Laying track on the South Line

However, the tremendous tourism potential in establishing a railway museum at Downpatrick was soon realised. The site of the museum nestled in picturesque countryside in the shadow of Downpatrick Cathedral. The railway could connect the town with an already established, but highly under-visited tourist spot, namely Inch Abbey, as well as another potential attraction, an 18th century corn mill being restored in the small hamlet of Ballydugan located about two miles south of Downpatrick, both of which are a short distance away from the old line.

An added bonus of the project would be that what was nothing but waste ground would be redeveloped into a public amenity, removing an eyesore from the town. The trackbed between these destinations was virtually intact and the majority was generously donated to Down District Council for use by the Railway by Dunleath Estates, though not all – including land to Inch Abbey beyond the Quoile Bridge, and a half-mile to Ballydugan.

In 1995 Phase 1 of the project was completed, with three quarters of a mile of track laid from the town to the only BCDR building that survives in Downpatrick – the Loop Platform and beyond to the reputed grave of the Viking King, Magnus Barefoot.

King Magnus Barefoot was a Viking King who was killed in battle in 1103, and the events of this historic event have been well documented in Norse legend as well as local folklore. However, until the construction of a new halt at the grave site, this site was completely inaccessible for anyone wishing to visit it. As well as this development, Phase 1 has seen the construction of a new station building in 1990 and new workshop facilities. The station building was originally built in the 19th Century as the residence of the manager of the town’s gasworks.

A historically listed building, it occupied a site on the opposite side of Market Street, but since the closure of the town’s gasworks had lain derelict, had been totally gutted by arson attacks and was in a dangerous condition. In a bid to save this important part of the town’s industrial heritage, the building was dismantled stone by stone and rebuilt on its current location by the Railway.

This action was a success in two respects: it saved an historic building from being lost forever and provided the Railway with an extremely apt station building. A water tower, formerly of Antrim Station was erected at the end of the bay platform and a signal cabin from King’s Bog, Ballyclare, was donated to the Museum by NIR as these once-common buildings are now obsolete in the modern railway network. The cabin was dismantled and re-erected in the same manner as the station building. 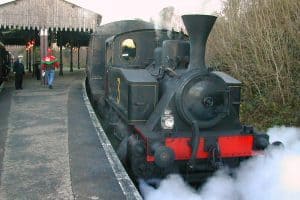 O&K No. 3 at the Loop Platform

Developments such as these have enabled visitors to the railway to view for themselves the operation of a railway station as it would have been for the first part of the century, and to see in use many railway artefacts that are now foreign to the modern railway service. As part of this phase of the project, the Loop Platform was completely restored.

This structure was the only BCDR building in Downpatrick to survive and was originally built a century ago to allow passengers on the Belfast-Newcastle express to disembark and board a branch train to Downpatrick or Ardglass, allowing the express to avoid having to stop at Downpatrick station and having to turn the engine around in order to proceed to Newcastle. However, in the years since the closure the platform had become extremely over-grown and the canopy had deteriorated into a dangerous condition.

The platform was cleared and a replica canopy installed. This platform now serves as an important part of our operations as passengers can change trains for refreshments, or at Halloween and Christmas visit Merlin the Magician or Santa Claus respectively in their very own Grotto coach.

Since then work advanced on Phase 2 of the project, another quarter mile of track was laid towards Ballydugan to the current limit of our land. Also a brand new 2.5 mile extension north to Inch Abbey was laid. This involved the largest single undertaking by the DCDR and was completed in January 1999. When the line was closed many of the bridges were removed for scrap, meaning that in order to complete the Inch Abbey extension the River Quoile would have to be re-bridged. With a distance of 140 feet to cross, this was no easy task and required two weeks for completion. 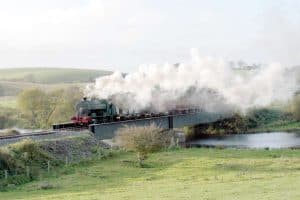 The original bridge was built in 1859 and was one of the few major river bridges within the BCDR network. The first bridge originally consisted of lattice trusses on timber piles driven into the river bed and this was replaced with a steel girder bridge in 1929. After the closure of the BCDR main line in 1950 the girders were removed, but fortunately the abutments and the centre pier survive intact.

The new bridge that has been reinstated is a replica of the 1920s steel girder bridge, and was fabricated by IES Ltd. of Dunmurry. Costing around £110,000 the funding for the bridge has been grant aided by the International Fund for Ireland and Down District Council. The main girders were craned into position from each abutment on separate days by a 100 ton crane.

The line veers off the original line roughly 260 metres north of the Quoile Bridge towards Inch Abbey, which was not originally a stop on the railway. A new station has been built close to the Inch Abbey Road, out of sight of the Abbey to avoid ruining the tranquillity of the area.

Beyond this we remain committed to completing the extension to Ballydugan, subject to successful land negotiations for the remaining trackbed. And in the future? Well, we have ideas, but you’ll just have to wait and see!