O&K No. 1 in running in trials, passing over the Quoile River

It’s not everyday that Traffic reports tell drivers to watch out for the railway engine travelling down the M1 and M2 motorways, but that’s the sight that motorists saw last Sunday as a steam locomotive “travelled home” to the Downpatrick & County Down Railway, Northern Ireland’s volunteer run full-size heritage railway.

Steam locomotive No. 1, built by the German firm Orenstein & Koppel, was being taken from the Railway Preservation Society of Ireland’s workshops at Whitehead, after going up there in 2004.

It’s taken two decades of work and funding from the Heritage Lottery Fund (for a new boiler, as the old one had corroded so badly it had to be scrapped) Interreg, as well a substantial amount from the DCDR’s own funds. Work on its restoration was undertaken in a joint effort by the DCDR and the RPSI over that twenty years, such a long period as the locomotive was in an incredibly poor condition after it was saved from lying in a County Down field in the 1980s.

No. 1 is one two sister engines at the DCDR, and was built in the mid 1930s by Berlin-based Orenstein and Koppel for the Irish Sugar Company (Comlucht Suicre Eireann) for use in their factories at Mallow, Thurles and Tuam. There were a total of nine of these engines built (three for each factory) and they were used to transfer sugar beet wagons from the main line sidings in the factory complexes for processing.

Even though German built, they are also a legacy of early post-partition Ireland, as normally Irish firms would have ordered new locomotives from Great Britain, but de Valera’s Irish Free State was engaged in an “economic war” with the UK and so the order went to Germany instead, leading to these very continental looking locomotives appearing on the Emerald Isle.

After withdrawal from service, in 1960 the engines were sent to Dalkey Station, south of Dublin, for storage with a view to being moved to England for preservation. This project did not work out (due to the key players finding out that the width between the rails in Ireland is different to that in England!) and the locomotives were moved to Ballynahinch Junction for storage in 1978, as part of an attempt to resurrect this branch line as a heritage line. When this scheme failed to get off the ground the locomotives were purchased from their owner and moved to Downpatrick a decade later in the late 1980s.

The move also saw us say farewell to “RH Smyth”, aka Harvey, who was returned to the RPSI depot at Whitehead

After a period of storage in Downpatrick, work began on rebuilding No. 1 while No. 3 was restored at the RPSI’s workshop in Whitehead. No. 3 was returned to service on Saturday 2nd October 2000, and is currently dismantled for a full ten-year boiler inspection, and it is hoped to return No. 3 to traffic as well ASAP.

A new boiler was fabricated by Woolf Engineering, and No. 1 was moved to Whitehead in 2004 for completion of its restoration. While No. 1 will be “chuffed” to see Santa this December, running all four weekends of the DCDR’s Lapland Express services (subject to running in trails), it is hoped when the loco is fully painted that it will be given a “proper” homecoming celebration some time early next year.

It will also be the first time in No.1’s life that it will have hauled passengers, instead of wagons full of sugar beet.

Our thanks to everyone who donated money for the restoration of this locomotive for our “Steamed Up” appeal, and remember donations are still needed to get No. 3 back up and running – see our donations webpage.

No. 1 made her Page 3 debut in the News Letter.

The Downpatrick and County Down Railway is celebrating after collecting a very prestigous trophy last weekend. It was praised for its community involvement and work in towards creating a tourism attraction unique in Ireland.

On Saturday 3 November, representatives from the DCDR and Down District Council traveled to Limerick to attend the 2012 AllIsland IPB Pride of Place Awards at a gala awards ceremony at Thomond Park. where the new sponsor IPB, joined Deputy Jan O’Sullivan, Minister of State at the Department of Environment, Community and Local Government to congratulate all the successful groups from across the island.

From the many entries, the DCDR won through to being runners-up in the Cultural Tourism section. Railway vice-chairman Robert Gardiner said: “This was the first time we have been entered in a competition like this and the competition was very tough. The winners in our category, Cavan Fleadh Cheoile, are along the lines of the West Belfast festival and deserved winners. It was a fantastic experience for our organisation.

“We are the only fully working heritage railway in Ireland and are quite unique in that respect. It was a real pleasure to be up there competing with the best across Ireland. With our new railway museum centre, our visitor numbers have increased well and there is a constant footfall from mid-week visits to families coming at the weekend.

“I would like to thank Damien Brannigan, Community Relations Officer with Down District Council, for all his help for his nomination and in making this happen for us.

“Our thoughts today are for our late Chairman, Michael Collins, who gave so much to the DCDR. It was much his efforts that brought the railway society forward to what it is today and all of our members wish to dedicate this award to his memory. Mike would have been so proud to have been able to collect this award. It is a tremendous accolade and the first of only a few that were won by Northern Ireland groups that night.”

The Category 6 Cultural Tourism winner was the Fleadh Cheoil, Cavan Town Comhaltas, with runners up Mulranney Tourism Group, Co Mayo and the Downpatrick and County Down Railway.

Down District Council Chairperson Councillor Mickey Coogan has expressed his delight at the recognition bestowed upon the Downpatrick and County Down Railway at the Pride of Place Awards 2012.

Councillor Coogan extended his congratulations to all the volunteers of the DCDR adding: “It is a fantastic achievement for the members and volunteers who have given up so much of their time for almost 30 years, not only to preserve our railway heritage, but also to promote one of Ireland’s only remaining operational railway attractions.

“The Pride of Place awards are a unique opportunity to recognise and reward the efforts of hardworking members of the community, and it is particularly important that the achievements of those who make a difference to Down district is celebrated.”

Down District Council Vice Chairperson who attended the ceremony, said: “This annual competition recognises and celebrates invaluable contributions that community partnerships make. Unlike other competitions, the Pride of Place Awards specifically acknowledge community involvement, the promotion of heritage and local people who shape their area. 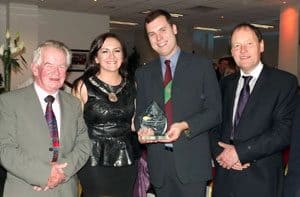 “The Downpatrick and Co Down Railway perfectly fulfill the criteria for this. They are a group of dedicated volunteers who have worked painstakingly to rebuild the railway and continue to work tirelessly to promote this wonderful tourist facility. I am so pleased the Railway has been acknowledged with this prestigious honour, particularly given some very stiff competition on the night.

“This recognition will allow for the further promotion of the tourist potential of the Railway and the resulting employment and business opportunities that this brings.

“It is also very fitting that the Railway should be acknowledged in such a way given the untimely and sudden death of their former Chairman Michael Collins. There is no doubt that this huge loss is felt by each of the volunteers. I am certain however, that Michael’s legacy will live on and his uncompleted works and goals will provide a pathway for the future of the railway in Down District,” added Councillor McCarthy.

More that 400 representatives from practically every county in Ireland were treated to music from Crystal Swing before the winners of the tenth consecutive annual competition were revealed. They were announced by Will Leahy, 2FM Presenter who acted as compere for the evening.
Minister O’Sullivan along with Co-operation Ireland Chairman Christopher Moran, Pride of Place Committee Chairman Tom Dowling and IPB Chief Executive Ronan Foley, presented the groups with their awards.

The All-Island Pride of Place Competition recognises and celebrates the vital contributions that community partnerships make to society. The focus is on people coming together to shape, change and enjoy all that is good about their local area. It differs from other similar projects in that they specifically recognise the involvement of the local community in all aspects of rural and urban regeneration including, promoting social cohesion, involvement in planning, the promotion of heritage and environmental awareness.

Christopher Moran, Chairman of Co-operation Ireland said, “I congratulate all the winners of this year’s Pride of Place Awards. The fact that we have reached this 10-year milestone is testament to the esteem in which the competition is held, celebrating as it does the achievements and contribution that community groups make to local society. It is important to highlight the wonderful, selfless work that is going on in your communities.”

Tom Dowling, Chairman of Pride of Place congratulated all the participants and he acknowledged that this year’s competition attracted the highest number of nominations since the competition commenced. He said: “The reason the communities are here tonight is because their local authority believes in them and recognises that they have huge pride in their place”.

Courtesy of Jim Masson, Down News
Original article can be found here