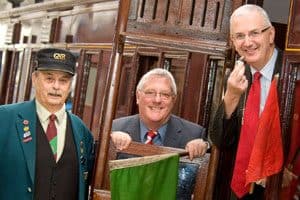 Transport Minister Danny Kennedy has hosted Brian Simpson, Chair of the European Parliament’s Transport Committee, on a visit to Northern Ireland – and took him on a trip on Northern Ireland’s only full-size heritage line!

Brian Simpson is also the Vice President of the Heritage Railway Association.

Danny Kennedy said: “European Transport policy needs to take account of regional variances in terms of transport needs and existing infrastructure. For example, unlike most parts of Europe, freight is transported entirely by road in Northern Ireland and it would not be economically viable to upgrade our rail network to transport freight.” 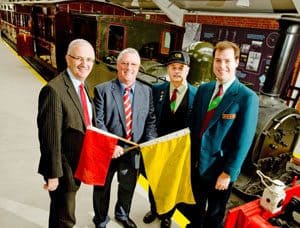 The Minister added: “The TEN-T and CEF regulations will determine how people and goods move throughout the EU for many years to come. It is important that we continue to work to ensure our transport infrastructure meets our future needs and supports economic growth by facilitating investment from other member states and beyond.”

The visit was organised after the Minister made a recent visit to the European Parliament in Strasbourg, where Danny Kennedy invited the EU Transport Chair to learn more about transport need and networks in Northern Ireland.

However heavy flooding nearly scuppered the day, as heavy rains had flooded our north line! Undaunted the Downpatrick Duck (nearly literally) paddled away and took the Minister and Mr Simpson out to Inch Abbey via the south line in the Railbus, hauled by the tamper. Not exactly as planned, but it did the trick!