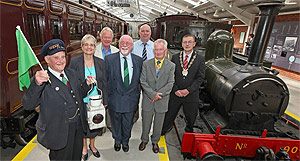 It’s Ireland’s only full-size heritage railway, and now the Downpatrick & County Down Railway has one thing it’s always been missing: a modern visitors’ centre.

Housed in a spectacular building, which harks back to the great Victorian termini, the “Carriage Gallery” is Ireland’s only dedicated carriage museum which tells the story of the development of railways in Northern Ireland from the 19th century to today, and was unveiled at a special “completion” ceremony on Friday 17th August.

The ‘Gallery’, costing £700,000, displays not artworks but vintage vehicles from all over Ireland, as well as carriages unique to the old railway which used to run between Belfast and Downpatrick, Newcastle, Ardglass and Bangor, as well as artefacts and an audio-visual exhibition. 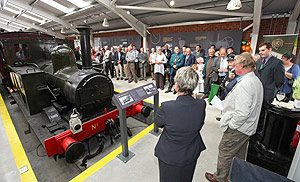 The crowd at the completion launch. Picture by Bernie Brown

Railway Chairman, Michael Collins, said, “This is the only centre in Ireland that gives the limelight to carriages, not the engines, as it was the carriages which carried the people that used the railways and it is through them that we can tell the social history of the areas and the people the railways served.”

The ‘completion ceremony’ saw over a hundred people, including local MP Margaret Ritchie and representatives from Heritage Lottery Fund and the Northern Ireland Tourist Board, as well as Down District Council, marking the end of a project that, Mr. Collins says, started “on the back of an envelope” in 2005 before the process of applying for £450,000 and £200,000 from the HLF and NITB respectively began. 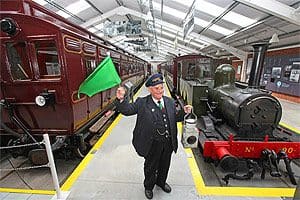 George Legge a volunteer with Downpatrick & County Down Railway at the launch of their new £700,000 ‘”Carriage Gallery” Ireland’s only dedicated carriage museum now open to the public.

The gallery boasts six vintage passenger carriages, the second oldest surviving steam locomotive in Ireland, one 1980s prototype Railbus and four goods wagons, including the former Belfast & County Down Railway’s “Royal Saloon”, which carried the future Kings George V and VI, as well as King Edward VII and their consorts.

Already causing a stir are two ancient six-wheeled carriages from the Midland Great Western Railway, from the 1890s which operated from Dublin to Galway, and the same type that starred in the 1952 John Wayne classic ‘The Quiet Man’. Hidden from view under tarpaulins since they were donated by Irish Rail in 2007, their dilapidated condition creates a direct contrast to the three fully restored vintage carriages on display.

The Gallery is an expansion of the already popular Downpatrick and County Down Railway attraction which has been opened since 1987 – painstakingly rebuilt by volunteers from the remains of a line abandoned in the 1950s – and runs vintage trains through the Downpatrick marshes to Inch Abbey on its own railway tracks every weekend of the summer and during special annual events throughout the year such as Halloween, Christmas and New Year’s Day. 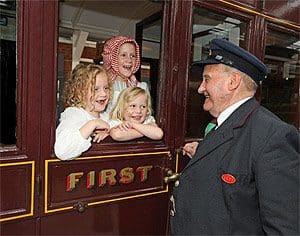 Coralie, Florence and Ruby Noble talking to George Legge at the launch of the new £700,000 ‘”Carriage Gallery”

Mr. Collins says, “In this year we have seen the opening of the Giant’s Causeway visitor centre, and the Titanic Belfast centre, and the new Gallery represents a significant enhancement of the tourist offering in Co. Down”.

He adds, “And like the Causeway Centre is not aimed at ‘Geology Enthusiasts’ nor is Titanic Belfast aimed at ‘Boat Enthusiasts’, our Gallery, museum, and trains are not aimed at just ‘Railway Enthusiasts’ or ‘train buffs’, but the entire family from mums, dads, kiddies, to granny and granddad, and we know that the Gallery will prove incredibly popular with our visitors”.

Trains are running every weekend at the Downpatrick & County Down Railway and tickets cost £5.50 adults and £4.50 children/senior citizens, including entry to the new Gallery, and the DCDR is always looking for new volunteers to join.