The Downpatrick & County Down Railway has taken delivery of a specialised piece of railway track – a “switch” or also known as a “turnout” – that allows trains to be guided from one track to another at a junction.

The switch was purchased from Irish Rail (Iarnród Éireann) in the early part of 2011, and was collected on the morning of 27th July from Bagenalstown in Co. Carlow.

Railway volunteer, Robert Gardiner, who went down fellow Downpatrick railway stalwart Robert Edwards to assist the Irish Rail team in dismantling it, said that they are delighted to have acquired this item.

“If we are to realise our goal of operating trains on both our North Line to Inch Abbey and our South Line to Ballydugan or the Racecourse, we need to remodel the track into Downpatrick Station – which was laid over 25 years ago – to allow this to happen,” he says.

“We currently operate under the one-engine-in-steam principle, which means we cannot have more than one train on the same piece of track.” 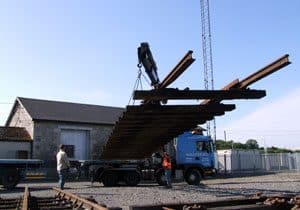 The overall dimensions of the turnout are 90ft long by 15ft wide, therefore a specialised crane lorry was needed to load and transport the materials north. As much as possible was lifted intact, but the majority was dismantled. Sleepers have been numbered to make reassembly easier in Downpatrick

“However,” he adds, “should we expand our services we couldn’t operate in this way – and we have worked out a comprehensive signalling and track plan which meets statutory requirements to achieve this in anticipation of our extensions opening.”

He continues, “We were very lucky to have acquired a number of turnouts from Northern Ireland Railways earlier in the year for the new sidings into our Heritage Lottery funded Carriage Gallery, but we would still be short a number of these turnouts to complete the work on our passenger lines,” adding, “So we have been keeping an eye out and our good friends in Irish Rail told us of this one in Bagenalstown which had been removed some time ago when the line had been upgraded.”

This turnout is of the older “bullhead rail” type, now largely redundant on modern railways, replaced by the more modern and heavier “flat bottom rail”.

Mr Gardiner continues, “It was a sweltering summer’s day for a change, and we were all roasted, but we would like to thank everyone in Irish Rail who helped move this turnout 200 miles north!”

It is estimated that the combined track redesign and signalling plan will be complete by 2013/2014.