Downpatrick helped celebrate the launch of a new Royal Mail set of stamps that feature a Northern Irish locomotive for the first time.Great British Railways, issued on 19 August, features some of the classic locomotives which powered their way around the UK.

The set also marks the 50th anniversary of the building of the last UK steam locomotive, British Rail’s Evening Star.The Northern Ireland locomotive featured on the 97p stamp is a London Midland and Scottish Northern Counties Committee Class WT – Engine No 2 pictured at Larne Station, circa 1947.

Based on a standard LMS design but built for the wider Irish track, the WTs were the last new steam locomotives delivered to the NCC. Widely known as the ‘Jeeps’, they were a highly successful engine used on both passenger and goods trains.

To launch the stamps Royal Mail teamed up with Downpatrick & County Down Railway. Chairman Michael Collins said: “This is the first time a Northern Ireland train has featured on a set of Royal Mail stamps and we are delighted to help with the launch.”While the majority of Northern Ireland’s railways were not incorporated into the “Big Four” railway companies, the NCC was and became very much an integral part of the LMS railway, and actively contributed to the development and modernisation of the railway network right across Britain and Ireland. It is very fitting, therefore, that the quintessential locomotive of the NCC – the ‘Jeep’ – which served Northern Ireland for so long, takes its rightful place alongside its more widely known cousins from Great Britain”. 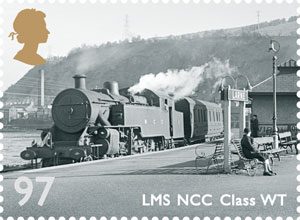 The 97p stamp which features an LMS (Northern Counties Committee) Class WT – Engine No 2 shown here at Larne Town, circa 1947

These comprised of the London, Midland & Scottish (including the Northern Counties Committee (NCC) in Northern Ireland), the London & North Eastern, the Great Western – which celebrates its 175th anniversary this year – and the Southern Railways.

After the Second World War the Big Four became British Railways (BR) in 1948, and in March 1960, Evening Star brought to an end over 130 years of steam-locomotive building for Britain’s mainline railways, leaving Swindon Works in a blaze of publicity in 1960.

Barbara Roulston, Head of External Relations for Royal Mail Group, said: “The association of steam and stamps goes right back to the 1840s when the introduction of the Penny Post coincided with the arrival of The Steam Age. The steam locomotive came to symbolize an age of unprecedented mobility and industrial prowess across the UK. For this issue we have selected six of the classic locomotives used by the Big Four railway companies as a fitting tribute to the steam era and also to mark the 50th anniversary of the building of the Evening Star, the last of the British-built locomotives.”

A similar event was also held at Whitehead, with WT class No. 4 appropriately in attendence, and at Headhunters Railway Museum in Enniskillen.