New Plates for No. 90 From Irish Rail 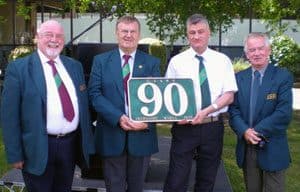 Mike Collins, Billy Glenn, John Beaumont and John Wilson, with the replica number plates for No. 90

The DCDR was presented with a set of two specially cast bronze number plates for GSWR locomotive No 90, now in the care of the DCDR, yesterday by Iarnrod Eireann‘s Chief Mechanical Engineer, Phil Verster at a ceremony in Dublin’s Inchicore Works. The plates were cast from worn out brass fittings of old diesel locomotives, and this gift was warmly received on behalf of the Society by our Finance Officer, John Beaumont.

The DCDR was attending Iarnrod Eireann’s ‘Family Day Out’ in Inchicore Works in Dublin on Saturday 22nd August. The team consisted of Chairman Mike Collins, Deputy Chairman John Wilson, Finance Officer John Beaumont, and volunteer Billy Glenn. IE had provided a hall where a number of the key players in the Irish railway preservation and modelling scenes were able to display their wares. Represented at the show were the Railway Preservation Society of Ireland, IRRS, West Clare Railway, Irish Railway Modelling Soc., Murphy’s Models, and Stradbally railway’s famous bookshop staffed as usual by Clifton Flewitt; while The Irish Traction Group had several of their diesel locomotives on show in the works itself.

The event was an opportunity for family and friends of IE employees to wander around the normally tightly secure Inchicore Works and admire the works, locos and rolling stock but also enjoy music, children’s amusements and dine from various outside catering facilities, one of which was serving superb hot dogs! IE had on display many examples of new and current locomotives and rolling stock, but also a couple of heritage vehicles. The RPSI also had several important items on display, including locomotive 186, which was in steam. Amongst the items the ITG were showing off were two ‘A’ class locomotives, A3r, and soon to arrive at Downpatrick, A39, which was growling away contently in the warm sunshine.

There were several other gems on show, including pioneer Sulzer locomotive B113, newly resplendent from the paint shop, twin 121 Baby GMs, 124 and 134, GSWR State Coach 351, which could be contrasted with the current IE State Coach 5408, beautifully restored GSWR all first 1142, railcar 22 213, and Driving trailer 4003. On display in the hall was a magnificent OO gauge model of the GNR Works in Dundalk as it was in its heyday.

The plates will be mounted on the side tanks of No. 90 in the coming weeks.