The Track Now Arriving at Platform 1 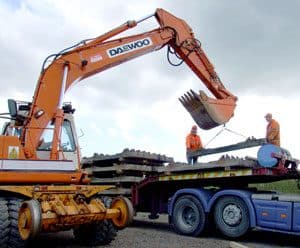 This follows the earlier delivery of rail from the same batch of second-hand track material that was reported here earlier in the year.

These sleepers and rail are intended for our planned extensions both east to the St. Patrick Centre, as well as for sidings into our new carriage display gallery (both subject to NITB approval) and in the longer term for Ballydugan.

Nearly 3,000 feet of rail and concrete sleepers has been purchased from IÉ, presenting a monumental logistical effort to move this material to Downpatrick, and more sleepers will be delivered in the coming weeks.

Bull-head rail is a type of track largely obsolete on the modern rail network, having been replaced by flat-bottom rail which is today welded together, as opposed to this jointed material which gave the railways of old that familiar “clickety-clack” noise.